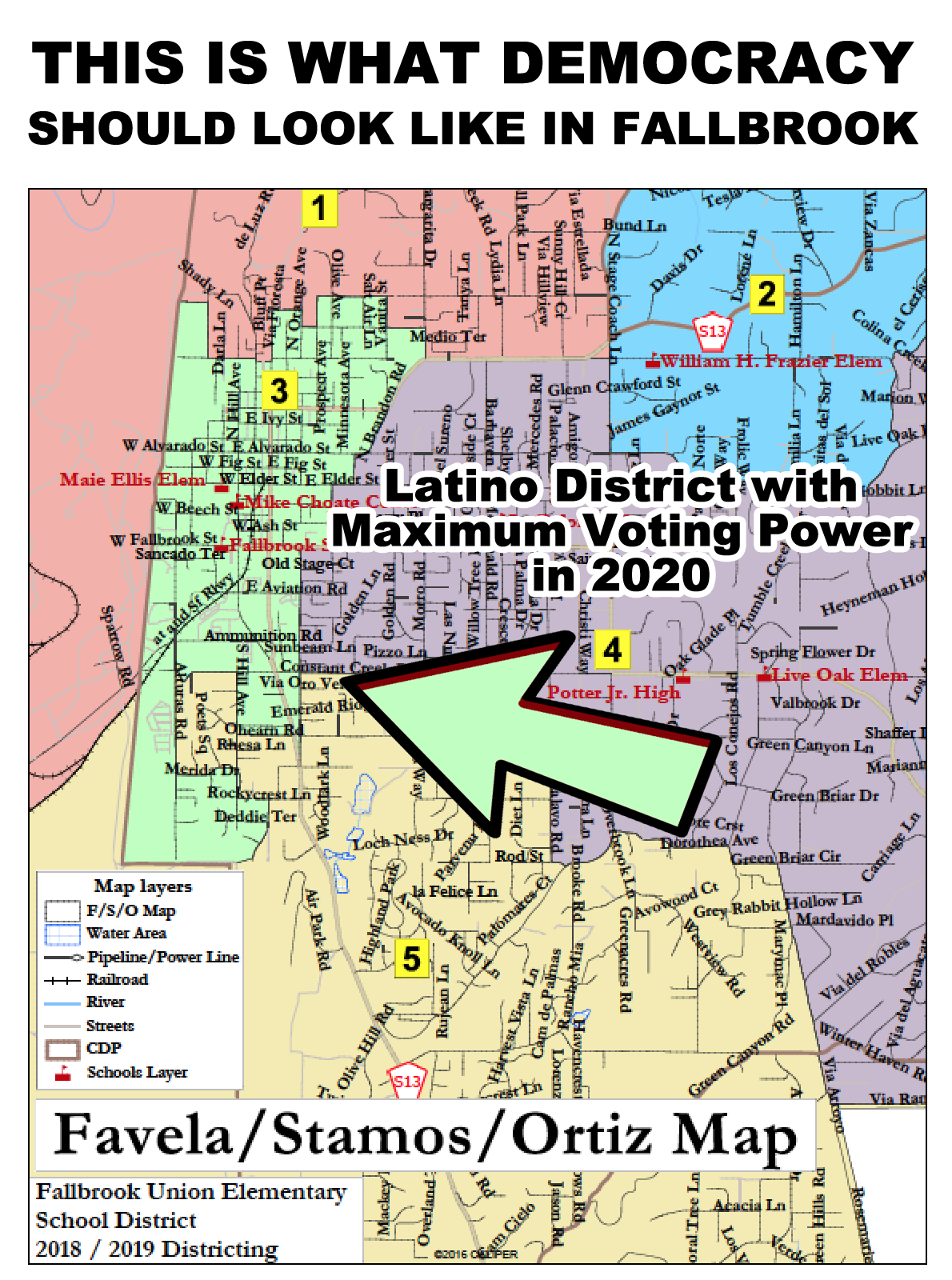 Dear Members of the San Diego County Board of Education,

We, parents, community members and leaders in Fallbrook support the Favela/Ortiz/Stamos Community Map and strongly urge board members to override the resolution passed by the FUESD Governing Board on February 4, 2019 to adopt Map 103 and its election sequence for the following reasons:

1. The Favela/Ortiz/Stamos (F/O/S) Community Map best reflects the diversity of our respective communities of interests and will finally allow traditionally neglected Latino neighborhoods (35% of total population, 61.6% of student population) to elect a candidate or candidates of their choice and remedy the California Voting Rights Act (CVRA) violation in 2020.

2. In a school district with over half of the student population coming from Latino homes, the F/O/S Community Map is the map that has a higher percentage of Latino citizens of voting age than the FUESD’s adopted Map 103.

3. The F/O/S map represents true communities of interests more authentically, best respects neighborhood boundaries and criteria of compactness, and strengthens the Latino vote, while Map 103 cuts off neighborhoods in the southern portion of downtown Fallbrook and adds a northeastern corner that does not have similar demographics.

4. We believe that adopting Map 103, which favors the current trustees above the interests of the Latino community, violates the CVRA, delaying a remedy until 2022 and potentially even further into the future. We incorporate by reference all of the oral testimony provided during the last two (2) months by the Fallbrook community in support of the F/O/S Community Map during the California Voting Rights Act (CVRA) process in Fallbrook. We also incorporate by reference the letter by the Mexican American Legal Defense Education Fund, communication between attorney of record Kevin Shenkman and FUESD’s general counsel, Daniel Shinoff, which provides additional information regarding our communities of interests and the reasons why we oppose Map 103. We respectfully urge the members of the San Diego County Board of Education to listen to the Fallbrook community and adopt the Favela/Ortiz/Stamos Community Map, created by the community, for the community, and in the best interests of our children.