Sociology professor Marisol Clark-Ibanez says she doesn't believe the teachers intentionally set out to be offensive but says their actions show a lack of cultural intelligence. 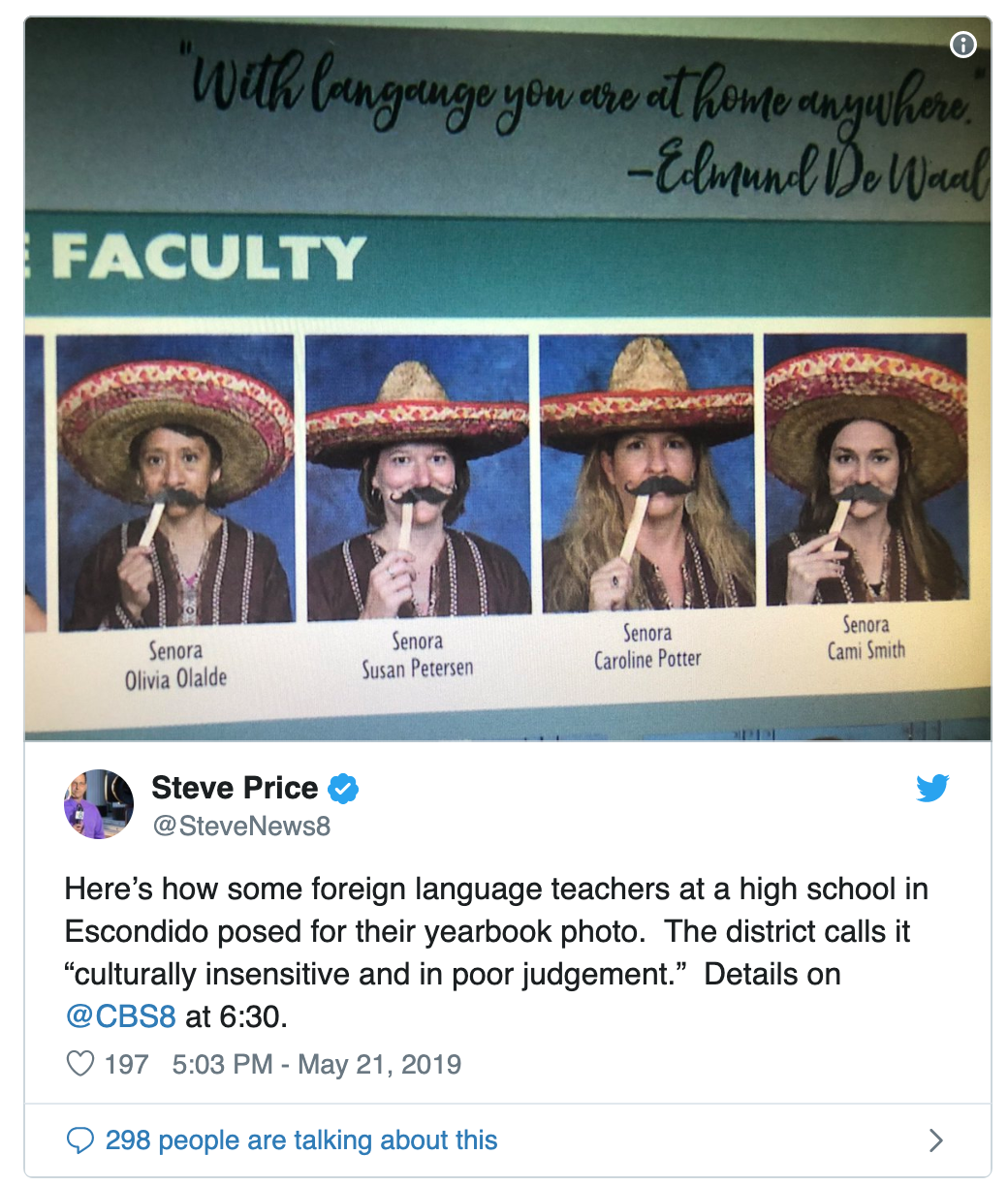 ESCONDIDO, Calif. — Photos in the San Pasqual High School yearbook are being called racially insensitive by some. Six world language faculty members are featured in the pictures wearing sombreros and thick, fake mustaches. While the pictures were taken to be funny, a lot of people say they aren’t laughing.

She says she got the picture from a shocked parent at the school.

“It came across as culturally mocking,” said Clark-Ibanez. “It also came across as maybe disconnected from what it is to have Mexican heritage, what is it to live in Southern California [and] in Escondido in particular.”

Clark-Ibanez is a faculty director of The National Latino Research Center and says she doesn't believe the teachers intentionally set out to be offensive but says their actions show a lack of cultural intelligence.

“This is not a culturally informed, respectful way of being a professional in such a diverse community like we have,” she said.

San Pasqual High School is in the Escondido Union High School District. A spokesperson for the district sent News 8 a statement that called the photos “culturally insensitive” and “in poor judgment.” They quoted the principal as saying, “It is our intent to use this situation as a tool to remind students, as well as staff, to remember the impacts of their words and actions.”

News 8 has also been told that staff members have been talked to and steps are being taken to ensure a similar situation does not happen again.

"Any of this dressing up business - I have not seen go well,” said Clark-Ibanez.

Clark-Ibanez says there's really no outfit these teachers could have worn that would have been OK in this situation. News 8 spoke with a staff member at the school who was extremely upset but declined to go on camera fearing retaliation from the district.

Below is the full statement from the Escondido Union School District

The 2019 yearbook for San Pasqual High School, “The Golden Legend,” was released yesterday (5/20/19) to senior students. It has come to our attention it contained photos from the World Language Department that are culturally insensitive and in poor judgement. The photos are a collection of pictures taken at the beginning of the year for use as teacher ID photos.

Administrators have discussed the issue with SPHS staff. Principal Martin Casas and his administrative team are taking precautions to ensure a similar situation does not occur in the future.

According to Principal Casas, “San Pasqual High School takes pride in its rich history and diversity. It is our intent to use this situation as a tool to remind students, as well as staff, to remember the impacts of their words and actions. We are committed to continuing our efforts to ensure all students, families and staff feel welcome and valued.”